This tutorial is about how car dealers, car photo editing services, and car photographers edit photos of cars from their raw state that is, straight out of the camera and convert them into digital masterpieces using Adobe Photoshop software.

Car photo editing is very essential for the proper showcasing of the car which makes it more presentable in the case of car commercials and advertisements.

The raw file of a car photo usually comes with lots of noise and color imbalances hence, the need for proper editing.

In this tutorial, adobe photoshop software is used for converting the car photo into a digital masterpiece.

Note that there is no direct or yardstick for editing car photos. What determines the kind of editing is the nature of the raw file. The lighting, color, and other characteristics. The raw file of the car below would be used for practicing car photo editing on photoshop. 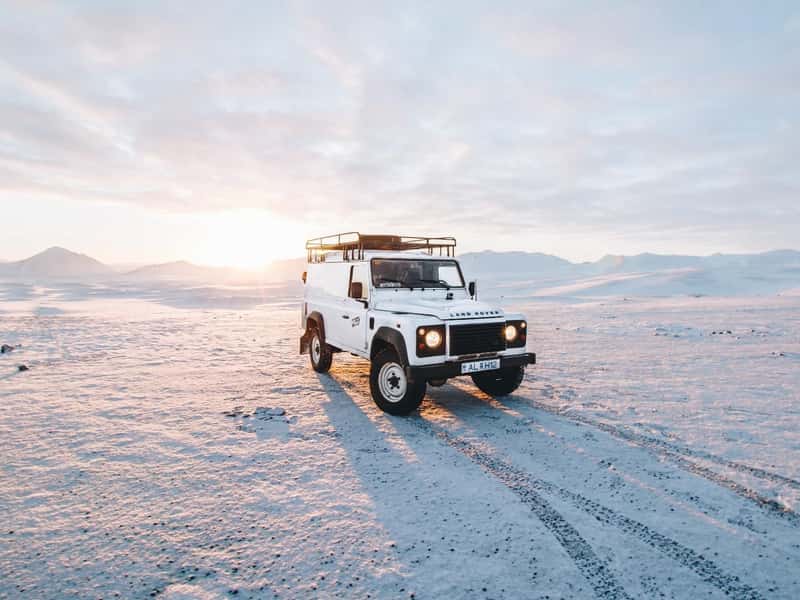 Below are the steps required to transform this raw car photo into a digital masterpiece.

INCREASE CLARITY AND REDUCE THE EXPOSURE OF THE CAR PHOTO

It is obvious from this raw car photo that the clarity of the car is not vivid. The light exposure from the sky as well as the entire photo is too much. We will attempt to sort this out before moving on.

Step 1: How to Edit Car Photos in Photoshop

Make sure your raw car photo is placed in your photoshop workspace. Click on the filter menu on the top panel and navigate to the camera raw filter, or press the shift + control + A for windows or shift + command + A on mac.

The exposure value was adjusted to -0.50 to reduce the lighting exposure. The clarity was also increased by +20 hence, eradicating noise and exposing the details of the car. These moves are indicated with red arrows as well as the camera raw filter panel as shown in the image below. 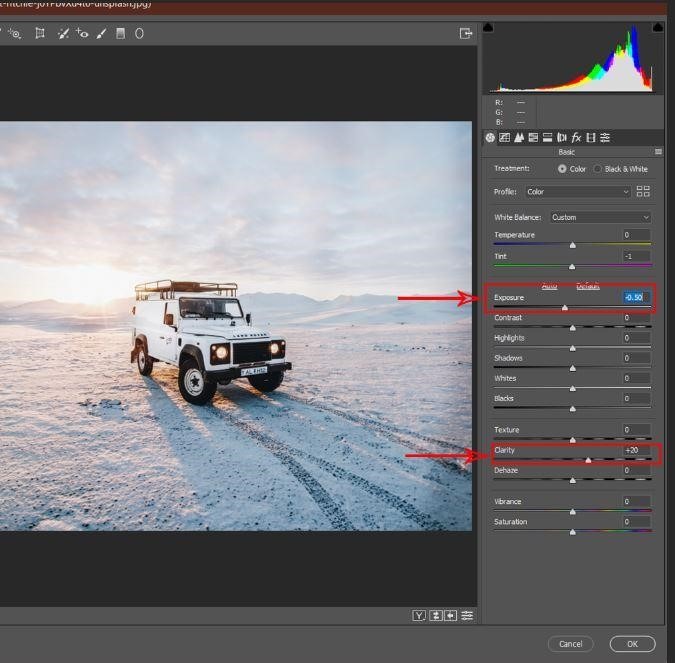 Note that the values of the exposure and clarity can be varied not necessarily the ones used in this tutorial. This is so because the exposure and lighting of car photos while editing depend on the raw file of the car.

USING THE GRADUATED FILTER TO DARKEN THE SKY

A special sub-filter in the camera raw filter would allow us to make adjustments to the sky alone without affecting the sky.

The graduated filter would allow us to perform this operation as it would only select the part we want, which is the sky in this case.

STEP 1: How to Edit Car Photos in Photoshop

On the top side of the camera raw filter panel, there is a small rectangular symbol that reveals the graduated filter name whenever the cursor is moved over it. Click on this symbol.

A + sign pops up, and this plus sign is used to mark the area you want to solely work upon or edit.

Drag the plus sign down to cover the area of the car photo you want to edit which is the sky in this case. At the right side of the panel, new values pop up aside from the previous value for the entire car photo. These new values are only for the selected area that is the sky.

The values for the exposure can be adjusted as desired as well are the blackness of the sky the contrast and sharpness can also be adjusted accordingly to get the desired result.

When you are sure that you have gotten the result you want, I mean the state of the sky, you press the ok button below the panel to effect these changes and return to the photoshop worksheet.

The result of these adjustments and the location of the graduated filter is shown in the image below marked with the red rectangle. 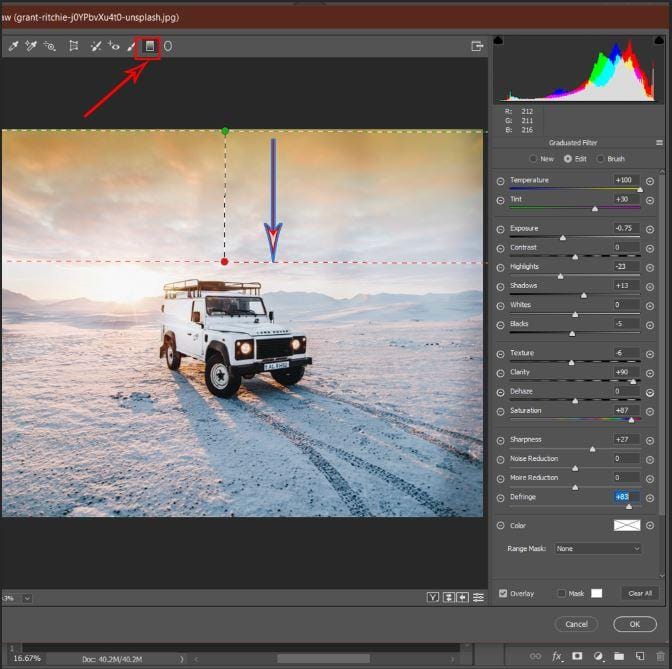 The sky has been darkened while the exposure of the car itself remains the same. The temperature and the tint of the sky can also be adjusted as there is no one-way car photos are edited for car commercials.

USING THE ADJUSTMENT CURVE TO FURTHER EDIT THE CAR PHOTO

The adjustment curve can also be used to consolidate the previous editing that has been made. Note that the curve adjustment would ideally affect the whole car photo. Nevertheless, the car area of the photo can be selected out just to make this adjustment affect the car alone. The selection can be done with various tools. The magnetic lasso tool is used in this case. This is used to select the car alone.

Step 1: How To Edit Car Photos In Photoshop

At the top right side of the photoshop interface, select the adjustment menu and several options would appear. Click on the curve option which is indicated why a small graph box with an embedded curve. Then the curve panel appears as shown in the image below. Adjust the curve accordingly till the desired contrast and dodginess are achieved.

Obvious from the layer panel, you will see a mask of the selected portion of the whole car photo which is the car itself in this case masked in a different layer automatically after the curve has been adjusted to get the desired result.

Make sure you do not move the curve too high or too low as this might distort the car image and exposure and spoil the whole car photo editing. The extent to which these adjustments are made still depends on the discretion of the photographer or car photo editor.

There are other tools in the tools panel which can perform similar functions as some of these aforementioned techniques for car photo editing. The dodge and the burn tools are such tools. The burn tool can reduce the exposure of a particular part of the car photo it’s been applied to, it also gives a burn effect to the photo. These tools can be applied to specific points where we want to adjust without affecting other parts.

Every photo has certain colors that bring out the detail of the entire car photo. Two different techniques would be used to bring out these details.

The hue and saturation technique would be used in this case. The obvious effect would be noticed and compared to the previous state of the car photo.

Step 1: How to Edit Car Photos in Photoshop

Select the adjustment option and there would be a pop-up of several symbols indicating adjustments techniques such as the curve that was used in one of the previous methods.

Select the hue/saturation adjustment techniques which are indicated by a partition rectangular symbol.

Anytime the hue is adjusted to a certain color, anywhere the color is present becomes more dominant. Some colors might be present in the car photo but might not be obvious to the eyes, this hue exposes such color. Therefore, according to the discretion of the car photo editor, the hue can be adjusted appropriately.

In this case, I want the blue part of the car image to be a little bit obvious, the front shadow and the ground has a little bit of that, so adjusting the hue to a value of +20 makes it more vivid as seen in the picture below compared to the previous state.

GET PREMIUM QUALITY EDITING FROM OUR EXPERT

The saturation can also be adjusted. This enhances the spreading and saturation level of the colors present in the car image. The saturation was adjusted to a value of +10 as seen in the photo below. 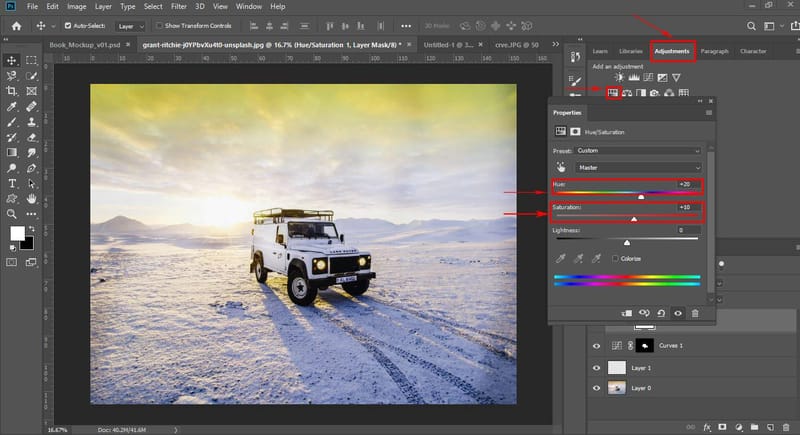 Note that there are also several adjustments or editing that can be made to this car photo. But for the sake of these tutorials, the adjustments would be limited to this as it is enough.

When the desired result is achieved, there is no need to further make adjustments.

Also note that if the car image used were to have a closer view as compared to this, there might be a need to select a different part of car photos through the use of the available selection tools and edit those parts differently since the details and texture of those part would be more obvious compared to this of a farther view. If you fall in problem to car photo editing then you can get car image editing service from Clipping Way.

I further used the graduated filter from the camera raw filter to adjust the exposure of the visible cloud. The outcome of the final image is shown below, placed side by side with the raw car photo. Therefore when a car photographer takes a car shoot for commercials, the raw car photo must be edited to make it a digital master class and make it ready for commercials or whatever purpose it was intended for. 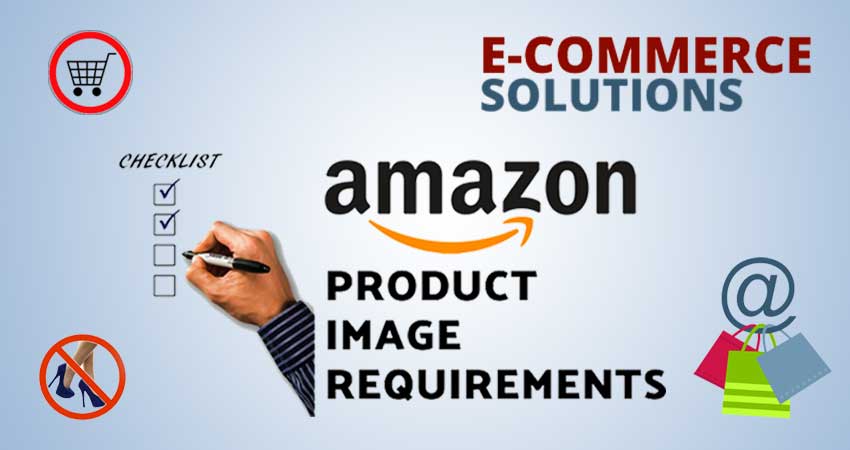